Tiger excited about pairing with Romo 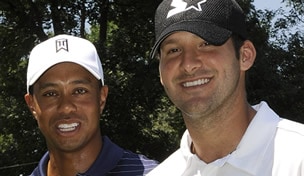 Earlier this month at the Abu Dhabi HSBC Golf Championship Tiger Woods dismissed his performance during the Wednesday pro-am, pointing out he hasn’t won many pro-ams in his career with a “Wednesday swing.”

At this week’s AT&T Pebble Beach National Pro-Am that trend could change if his celebrity partner, Dallas Cowboys quarterback Tony Romo, has his way.

“He can really move the ball. With the training that they do and the explosiveness that he has it translates to golf,” Woods said on Tuesday. “They have so much more power than we as golfers do. . . . He’s playing from the up tees this week, which should be fun . . . good for us.”

Woods also made light of a discrepancy over Romo’s handicap index. “They want to give him a plus-3 handicap, which is complete BS. I mean he’s a scratch. I play to a scratch every tournament, I’m a scratch,” he smiled.

Bill Murray ended a prolonged victory drought at Pebble Beach last year with his victory in the amateur portion of the competition. He was paired with champion D.A. Points.

“(Romo has) been grinding hard. He’s been calling me quite a bit and sending me video of his golf swing,” Woods said. “Post-football he wants to play golf. Maybe give it a run on the mini-tours and senior tour eventually.”