Tiger having trouble closing on Sundays 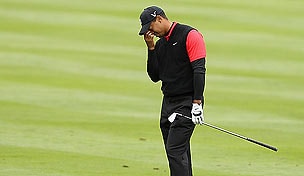 Getty Images
WENTWORTH, ENGLAND - MAY 24: Rory McIlroy of Northern Ireland watches a putt during the Final Round of the BMW PGA Championship at Wentworth on May 24, 2009 in Virginia Water, England. (Photo by Ross Kinnaird/Getty Images)  -

What’s the old saying? First we make our habits, then our habits make us?

As Sunday habits go, Tiger Woods is developing a bad one.

His Sunday shirt is taking on a bloody red hue.

Woods is beginning to make a habit of going the wrong way on Sundays with a victory within grasp. His 75 on Sunday at Pebble Beach comes after his failure to overtake Robert Rock when they were tied for the Sunday lead at Abu Dhabi just two weeks ago. By the way, nobody finishing in the top 50 at Pebble Beach closed with a higher score than Woods did.

Woods is beginning to make a habit of beating himself on Sundays.

Yes, Woods is improving, he’s moving in the right direction with his swing, but this Sunday stumble will leave a scar. All those missed short putts – a half dozen of them from less than 6 feet – create more demon doubts that must be slayed in future battles.

Is Woods better off, closer to regaining top form, after getting himself into Sunday contention again? Yes. Was Sunday a setback? Absolutely. The work is harder with the memories of all those missed short putts rattling around his head.

Still, Woods doesn’t have to look far to see how quickly a player can rebound from a Sunday stumble. Kyle Stanley needed just one week to do so in coming back to win at Phoenix last week. Woods also doesn't have to look far to see a struggling player remember what’s needed to win. Mickelson showed him Sunday at Pebble Beach. Mickelson slayed his own demon doubts there.