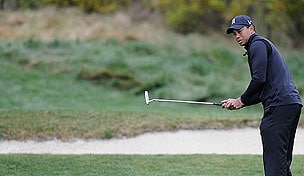 Charlie Wi is 18 holes away from his first career PGA Tour win. Shooting 3-under 69 at Spyglass Hill, Wi is 15-under par and three clear of Ken Duke at the AT&T Pebble Beach National Pro-Am.

Tiger Woods trails by four shots after shooting 5-under 67 at Pebble Beach on Saturday. After a bogey at the 12th hole – his third of the day – Woods reeled off six birdies in eight holes to jump into contention. Woods, however, failed to take advantage of the first seven holes at Pebble which could have put him closer still to Wi.