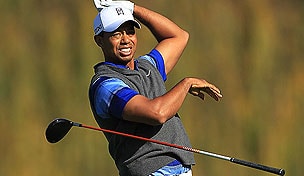 So Tiger Woods will skip a tournament he’s won six times to play in what is essentially a conflicting event – I guess that “horses for courses” thing comes with an expiration date. At least theoretically, Tiger’s little Abu Dhabi boondoggle will cost the PGA Tour plenty, be it in ticket sales, corporate clout or mainstream-media attention. Consider it another gentle reminder as to who wears the pants in that relationship.

Woods gets about $3 million to show up, a week in the desert sun and style points from all his buddies on the European Tour. Torrey Pines gets Bubba Watson and a half-filled hospitality tent, but before we decry another Tigerless trip to Southern California in the dead of winter, let us pause to look at the big picture:

The field in Abu Dhabi is outstanding, cluttered with all the familiar Euro stars who have revived the game’s international profile. America is still the place to be from March through September, but the rest of the golf calendar has become the property of the Rest of the World.

There are traces of conscience in Tiger’s competitive DNA – he will return to the AT&T Pebble Beach National Pro-Am for the first time since 2002, ostensibly as a means of paying back his tome tour for ditching the locals this week. At Pebble, Woods will partner with Dallas Cowboys quarterback Tony Romo, who could use a tip or two on how to finish strong while the fellas lumber through those 5 ½-hour rounds.

Whether Woods added the Pebble Beach as official compensation for his release to play in Abu Dhabi or is showing a debt of gratitude to a longtime, semi-loyal sponsor, he’s playing twice in the next three weeks. These days, that qualifies as a binge.

Pro golf is a much healthier game when the Dude in the Red Shirt shows up on Thursday. Doesn’t matter where, doesn’t matter how much he’s getting to be there, although one can see how appearance fees are slowly undermining the product’s credibility. And it doesn’t really matter all that much how Woods plays.

As the immortal Vice Lombardi once said, winning isn’t everything because sticking a peg in the ground has to count for something.