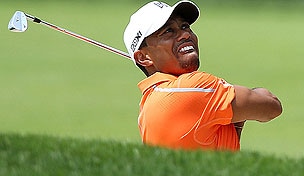 Among his many titles, Tiger Woods doesn’t hold the world record for fastest round ever played, but he knows how to motor his way around the course. Literally.

During a Tuesday conference call, Woods revealed that he routinely plays recreational 36-hole rounds in under three-and-a-half hours and has finished 18 holes alone in less than an hour.

“No problem,” he said with a laugh. “It helps having a fast cart.”

In the wake of the USGA announcing it will hold a symposium next month on curtailing slow play, Woods offered a two-word response on how to fix the issue: “Play faster.”

When asked to elaborate, he concluded, “I think it's grassroots. People just quite aren't educated about pace of play. I think even in public golf courses all the way up to our Tour events, the play has gotten slower over the years. It's one of those things where I don't know, at our level, the Tour level, it's easy to fix. Just start fining guys. At the local level, it's a little more difficult, more complicated.”

Woods said one of the main problems on the PGA Tour level is having to play rounds in threesomes as opposed to twosomes.

“Anytime you have threesomes you're going to add close to another hour in playing time,” he said. “Especially if it's a two-tee start, it's definitely going to take a lot longer.

“We found out this year at Akron [for the WGC-Bridgestone Invitational]. We played in twosomes the first two days; we basically flew around there. I think the slowest time was right around four hours. I think that was the slowest group. We had that weather and had to go early in threesomes off two tees on Saturday. We were up around the 5:20 mark.”