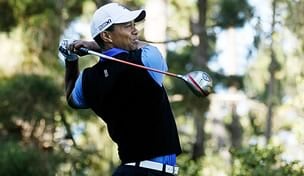 Getty Images
PONTE VEDRA BEACH, FL - MAY 03: Adam Scott of Australia smiles during a practice round for THE PLAYERS at TPC Sawgrass on May 3, 2010 in Ponte Vedra Beach, Florida. (Photo by Sam Greenwood/Getty Images)  -

PEBBLE BEACH, Calif. – Tiger Woods competed with pro-am partner Tony Romo at Spyglass Hill in Round 1 of the AT&T Pebble Beach National Pro-Am, beginning on No. 10. Jason Sobel is on site and tracked Tiger with hole-by-hole reports and some Twitter commentary (click for full Tiger Woods coverage).

Conclusion of Round 1: Tiger Woods opened with a solid 4-under 68 on the most difficult of the three courses in this week's rotation. After hitting 11 of 14 fairways, 14 of 18 greens in regulation and rolling 29 putts, perhaps the biggest sign that Woods is regaining his old form is the fact that he felt 'frustrated' following the round. That may be, but his frustrations didn't show up on the scorecard and that 68 leaves him in good shape entering the final three rounds.

No. 9 (par 4, 431 yards): On his last hole of the round, Woods belted a driver stinger down the right side of the fairway to conclude a great day swinging it off the tee. His approach looked like it was going to be tight, but instead of spinning, it released to about 15 feet past the hole. He pushed his birdie putt to the right and two feet past, but cleaned up for another par – his 10th of the day. (4 under through 18)

No. 8 (par 4, 399 yards): Woods found another fairway off the tee, but left an iron shot short for a third straight hole. His approach stopped 40 feet below the hole. He left the birdie attempt three feet short, but converted from there for another par save. (4 under through 17)

No. 7 (par 5, 529 yards): Woods hit driver on a line, straight down the left side of the fairway on this par-5. Going for the green in two, though, he came up short of the green and watched his ball roll back down the slope toward the pond. The bad news was that it wound up inside the hazard line; the good news was that it wasn't wet. In fact, Tiger was able to have a decent stance and flew one right at the hole, only to watch it bounce and roll 12 feet past. He then made the birdie putt for a huge momentum-swinger. What could have easily been par or worse if his ball didn't hold up in the hazard turned into his sixth birdie of the day. (4 under through 16)

@JasonSobelGC: Tiger Woods nearly hit second shot on the par-5 seventh into water. Hung up inside hazard line. Up and down for birdie. Must be good karma.

No. 6 (par 4, 416 yards): Woods pounded another drive down the right side of the fairway, but a slightly chunky short iron shot that was coupled with a small gust of wind in his backswing left him just barely on the front of the green with a back-right hole location. On his 80-foot – yes, 80 – putt for birdie, Tiger left it about 10 feet short. But he holed the second putt for a big par save, avoiding a third bogey for the round. (3 under through 15)

@JasonSobelGC: Scenery is so captivating at the fifth green that you barely notice Tiger Woods about to hit his putt.

No. 4 (par 4, 370 yards): Woods easily finds another fairway with an iron off the tee at the short par-4. From there, though, he made his worst swing of the day so far, flying the green long and left and landing in a sandy waste area where his ball rested in a depression from a footprint. He blasted off the slope in the middle of the narrow, kidney-shaped green, but could only manage to get it within 30 feet of the hole. He lagged a delicate par attempt to two feet, but that's a second bogey of the day for Woods – all due to a miscue with a short iron from the fairway. (3 under through 13)

@JasonSobelGC: After birdie on 3, Tiger was laughing and joking with playing partners. After bogey on 4, it's like a death march to next tee. Makes sense.

No. 3 (par 3, 152 yards): More efficient distance control from Woods on the short par-3. Pulled his iron shot 20 feet left of the pin, but made his longest putt of the day, sinking a lengthy one that he knew was good all the way, his arm raised while the ball was only halfway to the hole. That's now five birdies in 12 holes today. (4 under through 12)

No. 2 (par 4, 349 yards): Woods split the fairway yet again, finding the short stuff on yet another short par-4. He missed the green with his approach, but only on a technicality, as it came to rest just a few inches onto the fringe, some 12 feet from the hole. His birdie effort never looked good, though, as he pushed it about 3 feet past the hole. Tiger did make the comebacker for par, which will look like a one-putt in the statistics. (3 under through 11)

No. 1 (par 5, 595 yards): Third missed fairway of the day for Woods, but not by much, as his ball lands about a yard off the right side of the fairway on the long par-5. From there, he gave it a mighty rip, trying to reach the green in two. He did so – and then some. His ball landed in the collection area behind and to the right of the green. From there, Woods hit a beautiful flop shot to 5 feet and sank the putt for his fourth birdie of the round so far. (3 under through 10)

@JasonSobelGC: Colleague nearly stepped on Tony Romo's ball in the rough. Romo eluded the pressure and made birdie. Who says he can't beat a good defense?

No. 18 (par 4, 408 yards): With barely a breath of breeze here at Spyglass, Woods doesn't need his patented stinger – but it's working anyway. Banged a 3-wood stinger into the fairway on the closing hole, then hit a rare approach that didn't find its target, flying the green and landing in the rough just over the back. Decent chip from there helps him get up and down to save par and make the turn in 34. (2 under through 9)

@JasonSobelGC: Can't wait to ask Tiger Woods and Arjun Atwal what it's like being the short-knockers in their four-man pro-am group.

No. 17 (par 4, 325 yards): Yet another good sign for Tiger – he hit a perfect, piercing long iron stinger off the tee at the short par-4, a go-to shot he's often employed throughout the years. From there, he stiffed a flip wedge to 8 feet and sank the delicate downhill putt for his third birdie of the day. (2 under through 8)

@JasonSobelGC: Female fan just pointed at Tiger Woods and asked, 'Is that Tiger Woods?' Must be a holdover from last week in Scottsdale.

No. 16 (par 4, 476 yards): Woods used 3-wood off the tee and finds the left side of the fairway. Continuing a theme from the round, his iron shot landed just about pin-high, 20 feet from the hole. Tiger made another strong birdie effort, but had a second putt of the day lip out. Yet another tap-in par. (1 under through 7)

@JasonSobelGC: Tony Romo forced to punch out of woods, then has ball batted back by a tree. Mike Shanahan expected to start that tree at DE next season.

No. 15 (par 3, 130 yards): Woods has struggled with his distance control at times during the past two seasons, but it's looked nearly perfect over the first six holes so far today. On the downhill 130-yard par-3, he knocked one to pin-high, but missed the 25-foot birdie putt to settle for another par. Even so, that distance control should have him very optimistic thus far. (1 under through 6)

No. 14 (par 5, 560 yards): Another hole, another overcooked driver for Woods. After pulling his tee shot into the left rough, he was forced to lay up well short of the pond guarding the green. His third shot into a tucked right hole location landed 15 feet above the hole, but his birdie attempt barely missed, leading to his second par of the day. (1 under through 5)

@JasonSobelGC: Every time an amateur hits a good shot and gets a 'Well done right there' from Tiger, it sounds like it's scripted from his video game.

No. 13 (par 4, 441 yards): Woods' first 'miss' of his young PGA Tour season didn't miss by much. He overcooked his driver off the tee and found the left fairway bunker on the par-4 hole. He could only blast his approach from the bunker to 30 yards short of the green. From there, Woods hit a nice pitch that spun and stopped about 8 feet above the hole. His par attempt caught the lip and stayed out for his first bogey of the day. A bit of a sloppily played hole, all started by a pulled drive. (1 under through 4)

@JasonSobelGC: First bogey of the PGA Tour season for Tiger Woods. Don't worry, though. His partner made par. You heard it here first: Tony Romo is clutch.

No. 12 (par 3, 178 yards): Woods' distance control looks impeccable today. On the downhill 178-yard par-3, he knocked one to the exact distance, 12 feet right of the hole. Left with a slippery birdie putt, he overplayed the left-to-right break and kept it hanging off the left side of the hole. First par of the PGA Tour season for Tiger. (2 under through 3)

@JasonSobelGC: Tiger Woods makes par on his third hole of the season. Perfect game is over. You can now talk to him again.

No. 11 (par 5, 528 yards): Woods pounded driver down the left side of the fairway, then hit an iron from 180 yards on the par-5 to pin-high, about 15 feet right of the hole. His eagle attempt had the right line, but stopped about 6 inches short of the hole, giving him a tap-in birdie. (2 under through 2)

@JasonSobelGC: Tiger Woods taps in for birdie to move to 2-under through two holes. Still pitching perfect game. Trying to birdie every hole this season.

No. 10 (par 4, 407 yards): Let it be remembered that Tiger Woods started off his 2012 PGA Tour season on the right foot, hitting a fairway wood off the 10th tee with a low cut that found the right side of the narrow fairway. From there, he nearly jarred an approach shot, as the ball danced around the stick before settling a few feet away. He made the birdie putt to get into red numbers on the leaderboard right away. (1 under through 1)

@JasonSobelGC: Tony Romo makes bogey on the opener, but his partner cards birdie. Like getting bailed out with a big running play on third down.