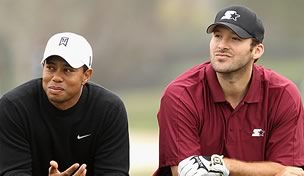 No. 18 (par 4, 381 yards): Woods concluded a beautiful ball-striking day by hitting his drive right down the fairway – his 12th in 14 tries today – and then finding the green – he was 16-for-18 – spinning his approach to about 20 feet. Same old story from there, though, as he drilled his putt through the line and three feet past. He knocked it in from there for his 12th par of the day and a 2-under 68. (Overall: 6 under; Today: 2 under through 18)

No. 17 (par 4, 430 yards): Woods pulled out the driver and split the fairway on this par-4, continuing what's been a (mostly) terrific driving display over two days. His short iron into the green landed just 12 feet from the hole, but his birdie putt stopped on the left edge of the hole. Another in a long line of missed opportunities on the greens for him today. (Overall: 6 under; Today: 2 under through 17)

No. 16 (par 4, 500 yards): This 500-yard par-4 always plays long, but that's especially true in the drizzle that has been coming down throughout the afternoon. For only the second time today, Woods missed a fairway, finding a fairway bunker on the left side. From there, he went bunker-to-bunker, leaving his second shot in another trap about 75 yards short of the green. His third shot hit the back of the green and spun back 20 feet to pin-high, but he missed the ensuing 15-footer to card his second bogey of the day. (Overall: 6 under; Today: 2 under through 16)

No. 15 (par 4, 415 yards): Quite simply, Woods' swing hasn't been this dialed in for two years. He belted a 3-wood stinger off the tee, then hit an approach to 20 feet below the hole. The question mark so far has been his flatstick. From 20 feet away on a wet green, he knocked it eight feet past the hole, saying a minute later that it was 'bad speed, bad read.' He did, however, hole the comebacker to salvage par. (Overall: 7 under; Today: 3 under through 15)

@JasonSobelGC: Some fan keeps yelling: 'Come on, Tiger! You are the best for the next 100 years!' Maybe. But expect a big down year in 2113.

No. 14 (par 3, 190 yards): What was that about low-maintenance pars? Woods just posted another one, hitting his tee shot on the par 3 to about 25 feet and barely missing the birdie effort. Even so, it's a par without any struggle. (Overall: 7 under; Today: 3 under through 14)

No. 13 (par 4, 401 yards): With a steady rain coming down over these seaside holes, Woods banged a 3-wood down the fairway and hit an approach to the safe part of the green. His winding 25-footer scared the hole, but stayed out, resulting in another low-maintenance par. That's been a theme throughout the day. Even when Tiger is making par, it's been after a missed birdie putt, rather than scrambling around. (Overall: 7 under; Today: 3 under through 13)

@JasonSobelGC: Having a great week at Pebble Beach so far, but still waiting for somebody to bake some clams.

No. 12 (par 5, 599 yards): This one is a monster of a par 5. How much of one? Woods pounded a drive down the left side and hit a solid 5-wood ... and still had a full wedge into the green. Hey, maybe there's something to being forced to lay up. He stuffed the wedge to a foot and tapped in for birdie – his fourth of the day. (Overall: 7 under; Today: 3 under through 12)

No. 11 (par 3, 176 yards): There may not be a more gorgeous hole on this course than this par 3, which the pros play from an elevated tee box. Woods hit a decent tee shot that landed 20 feet short and right of the hole. Missed the birdie attempt, but tapped in for yet another par. (Overall: 6 under; Today: 2 under through 11)

No. 10 (par 5, 544 yards): Woods pounded yet another driver off the tee, finding the optimal right side of the fairway on this par-5. He hit a big cut with a fairway wood for his second shot that actually glanced off a gallery member and trickled into the rough some 30 yards short of the green. His attempt at a flop shot hit the green, but rolled through, up against the collar of the rough – his first missed green of the round. Putting from there, he came within one ball revolution of finding the cup, but left it agonizingly short, resulting in another par. (Overall: 6 under; Today: 2 under through 10)

No. 9 (par 3, 182 yards): Using a mid-iron into the wind on this 182-yard par-3, Woods got that distance control back under control, hitting an absolute dart to pin-high, 8 feet left of the hole. For a fourth time today, though, he missed one inside of 10 feet, as he lipped out the birdie effort. If he makes each of those, he's one stroke off the lead right now. Just a guess, but if this continues, 'I just couldn't find the hole' will be part of his post-round interview session. (Overall: 6 under; Today: 2 under through 9)

@JasonSobelGC: En vogue to call MPCC best course in this rotation. That's like calling Ringo your favorite Beatle. You can say it, but you don't mean it.

No. 8 (par 4, 454 yards): Woods took 3-wood off the tee, hit a stinger and finished with a club twirl, so you know he liked it – and for good reason, as he found the center of the fairway on this par-4 dogleg left. His approach only reached the front left portion of the green, though – remember that distance control which was frustrating him yesterday – leaving him 30 feet for birdie. He overread the break, missing to the right, but easily cleaned up for par. (Overall: 6 under; Today: 2 under through 8)

No. 7 (par 3, 226 yards): On the awe-inspiring, uphill hole, Woods hit a gorgeous long iron shot to 10 feet below the hole. Faced with a downhill, left-to-right putt, he finally got back on the right track with the flatstick, finding the center of the cup for a second consecutive birdie. (Overall: 6 under; Today: 2 under through 7)

@JasonSobelGC: Colleague just complained about having to walk three holes to get a shuttle back to Pebble Beach. Hmm, wonder why the media gets a bad rap.

No. 6 (par 5, 548 yards): After a lengthy wait on the par-5 tee box, Woods hit driver off the tee for the first time all day and ripped it down the center of the fairway. His par-5 birdie percentage has subsided the past two years, often due to blindly going for every green in two, but in this instance it was the perfect call, as Tiger stuffed his second shot to 6 feet. Instead of claiming his first eagle of the PGA Tour season, though, Woods again missed a very makeable putt, settling for birdie to move back into red figures for the day. (Overall: 5 under; Today: 1 under through 6)

No. 5 (par 4, 349 yards): Not exactly a bounce-back, but a routine par for Woods following that bogey. He found the fairway with an iron off the tee, then hit the green and two-putted. (Overall: 4 under; Today: Even through 5)

No. 4 (par 4, 401 yards): First missed fairway of the day for Woods, as he pushed a 3-wood into the fairway bunker on the right side. His swing from the hazard was immediately punctuated by slamming his club down in the sand and yelling a profanity. The end result was hardly terrible, though, as he found the front left portion of the green with a back-right hole location. He lagged a putt to 6 feet, but wasn't able to convert the par. First bogey of the day. (Overall: 4 under; Today: Even through 4)

@JasonSobelGC: Bill Murray is wearing a pink glove on his left hand and a purple glove on his right hand. But hey, it looks good on you.

No. 3 (par 3, 155 yards): Tiger complained after Round 1 that his distance control was lacking, but it looked perfect on the first par 3 of the day, as he stiffed a short iron to 5 feet. Then came his first unforced error, so to speak, of the day, as he missed the short birdie attempt. Woods' putting has looked solid until now – that's the shortest he's missed in the past two days. (Overall: 5 under; Today: 1 under through 3)

No. 2 (par 4, 391 yards): Another hole, another pummeled 3-wood by Woods off the tee. This one finds the center of the fairway, but he comes up about a club short on his approach shot, leaving it about 30 feet shy of the hole. His birdie attempt had the right speed, but was right the whole way and missed. He tapped in for par. (Overall: 5 under; Today: 1 under through 2)

@JasonSobelGC: Tony Romo started his round birdie-birdie. Next stop: Q-School. Don't worry, Cowboys fans. Maybe there's a golfer who can replace him at QB.

No. 1 (par 4, 454 yards): Woods maintained that he drove it on a string in Round 1 and he started Round 2 by finding another fairway, using 3-wood off the tee. However, he only caught the right side, slightly stymied by overhanging branches from a nearby tree. From there, though, he hit one of the most impressive shots we've seen from him recently – a towering fade around the tree that caught the left side of the green and finished 4 feet from the hole. Woods converted the birdie to start his round in red figures for the second straight day. (Overall: 5 under; Today: 1 under through 1)

@JasonSobelGC: Difference between Arjun Atwal and Tiger Woods? Atwal just flew the green and the sea parted. Team Tiger would have taken the bullet.