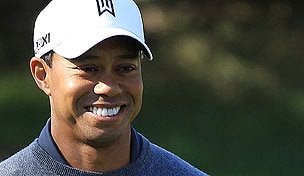 Getty Images
AVONDALE, LA - APRIL 23: Tim Petrovic hits from the sand on the 18th hole during the first round of the Zurich Classic at TPC Louisiana on April 23, 2009 in Avondale, Louisiana. (Photo by Dave Martin/Getty)  -

Tiger Woods needs to win five more major titles if he is to break Jack Nicklaus' 18-victory benchmark. As he turns 36 on Friday, that added candle on his cake will make the challenge more difficult.

Five major victories would match the career of Seve Ballesteros. Only two men in history have managed to accomplish that from age 36: Ben Hogan and Sam Snead.

Hogan won six of his nine majors after turning 36. Snead took five of his seven majors, including three Masters and two PGA Championships, after turning 37.

By contrast, all seven of Arnold Palmer's major wins came before the age of 36.

Even Nicklaus could not bequeath his own major mark post-36 to Woods and get Tiger to 19. Nicklaus won four major titles, including his historic sixth Masters in 1986, after becoming 36. He won two majors in 1976 at age 35.

A handful of recent players have had multiple major success in their late 30s and beyond, including Padraig Harrington, Angel Cabrera and Vijay Singh. But none have done what Woods needs to do.

Perhaps Woods' best chance to win majors going forward is at Augusta National. He’s earned four green jackets and hasn’t finished outside the top 6 there since 2004. It is also the most friendly major to players over 36, at least by the numbers. Nineteen of the 75 Masters titles – a remarkable 25 percent – have gone to players age 36 and over.