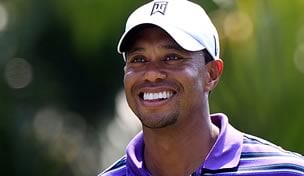 Tiger Woods told his Twitter followers he’s all set for his 2012 debut next week in Abu Dhabi.

As part of a 20-minute question-and-answer session on Friday, Woods responded briefly to fan inquiries on Twitter. Topics ranged from the state of his game to that of Tony Romo’s golf skills – Woods’ potential partner at February’s AT&T Pebble Beach National Pro-Am.

“Yes! Ready to go,” Woods responded to a question about his fitness. The 14-time major winner said his prep is going by the book, as it does for every other event.

As part of that work, Woods is continuing to implement a putting lesson – releasing the blade – from partner Steve Stricker at the Presidents Cup.

“No more lessons, still working on what (Stricker) told me to do,” he said.

Woods is also high on the game of his reported Pebble pro-am partner, Dallas Cowboys quarterback Tony Romo. Asked if Romo could someday successfully qualify for the U.S. Open, Woods said, “I know he can shoot in the 60s, a matter of shooting them when it counts.”

The world No. 25 was asked if the game’s governing bodies should intervene on the advance of technology. Given the subject matter and the character limit, Woods’ answer could be interpreted as either noncommittal or succinctly squaring the blame.

“Natural progression of golf, look at how ball has changed,” he said.