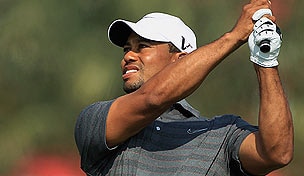 Several players are poised to make giant leaps in the Official World Golf Ranking on Sunday.

If Tiger Woods can convert his share of the 54-hole lead in Abu Dhabi into his second win in as many starts, he will jump back in the top 10, vaulting over current No. 10 Jason Day.

Rory McIlroy could retake the second spot in the ranking with a win at Abu Dhabi. He would surpass Lee Westwood for second, pulling within one-and-a-half points of Luke Donald for the No. 1 spot.

If co-leader Robert Rock manages to earn his second European Tour title, he would vault into the mid-50s in the world ranking.

On the other side of the world in San Diego, Kyle Stanley is poised for his first PGA Tour title. Leading by five after three rounds of the Farmers Insurance Open, the second-year PGA Tour player would likely vault inside the top 64 in the ranking with a win at Torrey Pines. That ranking would likely net him a spot at the WGC-Accenture Match Play, along with a spot at the WGC-Cadillac Championship and a ticket to the Masters.