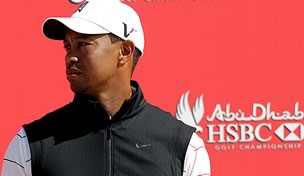 Getty Images
SINGAPORE - MARCH 06: Angela Park of Brazil tees off on the par four 6th tee during the second round of HSBC Women's Champions at the Tanah Merah Country Club on March 6, 2009 in Singapore. (Photo by Ross Kinnaird/Getty Images)  -

Hoggard: Close ... But No Cigar

Discussion: Was Tiger's week at Abu Dhabi a success?

Tiger co-leads with Rock after Round 3

Woods, McIlroy two back of surprise leader after two rounds

McIlroy shows Woods how it's done in Round 1

He Said/She Said: Tiger or the field?

The cost of Tiger: Woods getting huge appearance fee

Tiger knocks it close on No. 3, Sunday

Steve Sands talks with Tiger - Round 3

Tiger meets with the media

Head down, blinders on for Woods in Round 2

Reading (greens) is fundamental for Tiger

Highlights: Woods struggles with the putter in Round 1

McIlroy gets the better of Woods in first round

First-round highlights from the field at Abu Dhabi

Dhabi debut: Woods back on the scene

Donald No. 1 but not the main attraction

McIlroy get sneak peek at Woods

Donald, Tiger and Rory! Oh, my!

Ask Rex: Q and A from Abu Dhabi


What are Tiger's chances in Abu Dhabi?