Time to walk the walk: DJ back out on course 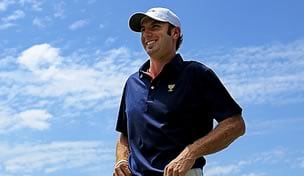 Dustin Johnson entered the Humana Challenge a week ahead of his original plan to return to the PGA Tour after arthroscopic surgery on Nov. 29. On the eve of the Tour’s mainland debut in 2012, Johnson has made a game-time decision to compete.

“I'm going to go the gym and get some work done on it tonight and in the morning. It's going to be all right, but … everything's going really good with it, with the healing. My knee's feeling strong,” he said on Wednesday.

Johnson first picked up a club after the procedure to repair knee cartilage about four weeks ago. Just before turning the calendar to 2012, Johnson began hitting full shots again.

What Johnson has not been doing any of, however, is walking golf courses.

“Just the last couple days I [have] been playing on a cart, but I’ve been just walking, kind of walking every other hole, just to stay kind of loose and loosen it up,” he said.

The world No. 8 does not anticipate the walk tripping him up on Thusrday.

“As far as hitting balls and doing all that stuff, it doesn't bother me, but I haven't been out there all day walking on it yet,” he said. “But I don't think it's going to be an issue.”