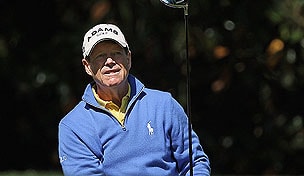 Getty Images
AUGUSTA, GA - APRIL 06: Tom Watson watches a shot during the second round of The Masters at Augusta National Golf Club on April 6, 2012 in Augusta, Georgia. (Photo by Scott Halleran/Getty Images for Golfweek)  -

The Australian Open received a boost Friday when eight-time major champion Tom Watson committed to play the Dec. 6-9 event at The Lakes Golf Club in Sydney.

It is the first time he has played the tournament in nearly 30 years.

Watson, who turns 63 next week, won the Aussie Open in 1984, the year after he won the last of his eight majors.