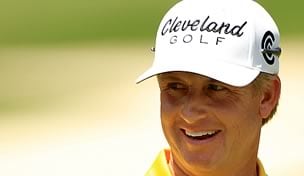 Getty Images
NEW DELHI, INDIA - FEBRUARY 11: Wen-Chong Liang of China in action during Round One of the Avantha Masters held at The DLF Golf and Country Club on February 11, 2010 in New Delhi, India. (Photo by Ian Walton/Getty Images)  -

Though David Toms did not have the kind of week he hoped for at the Hyundai Tournament of Champions, the Colonial winner from last year was afforded a quick Monday jaunt around Kapalua so he could catch the BCS National Championship game.

The LSU product began the final round of the season-opener in last place among the 27-man field. In the house at 6-over after Sunday play, Toms had the first tee time at the Plantation Course.

Toms took advantage of his 1:55 p.m. ET starting time and the fact that he was playing alone. Donning LSU purple and yellow, he got around in 2 hours, 31 minutes to finish the tournament. Perhaps sensing the clubhouse, Toms stuck his approach at 16 to 4 inches and then birdied 17 as well.

Despite the rocket pace, Toms shot his best round of the week. His 2-under 71 on Monday was three better than any of his previous rounds.

Toms may not have had enough time to smell the roses at Kapalua on Monday, but he did afford himself plenty of time to watch grass-eating LSU coach Les Miles lead his team onto the artificial turf of the Superdome against Alabama.