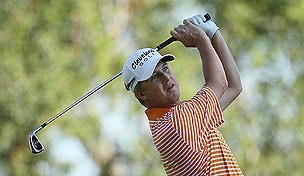 David Toms and Camilo Villegas showed an early glimpse of hope for 2012 on Thursday as they shared the early lead in the Humana Challenge at 9 under.

Both carded 63 to take command, with Villegas charging on the Nicklaus Private course while Toms got the best of La Quinta.

Brandt Snedeker, who underwent hip surgery to end his 2011 season, made his return to the Tour and shot an 8-under 64 to share third with rookie Ted Potter Jr. and Sang-moon Bae.

Dustin Johnson, who moved up the start of his season by a week after a successful recovery from arthroscopic knee surgery, finished at 2 under after walking his first 18 holes of the year.