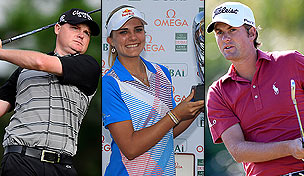 The 2011 season was full of parity, playoffs and first-time winners. Rory McIlroy lapped the field at the U.S. Open at Congressional and Charl Schwartzel birdied his way into major championship history like no one before him. But who gave us the top breakthrough performance of the year? GolfChannel.com senior writers Jason Sobel, Randall Mell and Rex Hoggard offer up their picks.

If we search across all major tours for the breakthrough performer of 2011, there’s one player who stands above all others. I’m going with Ted Potter Jr.

Don’t know the story? You should.

Six years ago, the lefty reached the Nationwide Tour as a 20-year-old. A phenom in the junior ranks in his home state of Florida, Potter struggled mightily in his first full season on a PGA Tour-sanctioned circuit. How mightily? He played 24 events that year … and made the cut in exactly zero.

In the time since, Potter has bounced back and forth between the NGA Hooters and Nationwide tours, which is golf’s version of jumping between Double-A and Triple-A. In 2006 and ’09, he was player of the year on the Hooters circuit; in 2007 and ’10, he had more unsuccessful ventures on the Nationwide.

That all changed this year. After tearing up the Hooters Tour early on, he Monday-qualified for the Nationwide’s South Georgia Classic and won by three, then followed with a victory at the Soboda Golf Classic four months later.

The end result was a second-place finish on the money list, easily ensuring his place on the PGA Tour for the first time in 2012. It remains to be seen whether he breaks through in the big leagues in a big way, but his elevation in status this past season should qualify as the best on any tour.

As breakthroughs go, Lexi Thompson set a new standard in the women’s game.

When you win an LPGA event at 16, making yourself the youngest player in the 62-year history of the tour to win, it’s more smash-through than breakthrough.

Winning the Navistar LPGA Classic in September, Thompson also set up a remarkable break-in. With the title, she sought and received a waiver of the LPGA rule that requires members be at least 18 years old. This allowed her to claim an exemption to join the tour. She’ll break in as a full tour member next year beginning at the LPGA’s season-opening ISPS Handa Women’s Australian Open Feb. 9-12 at Royal Melbourne.

When Thompson won the Omega Dubai Ladies Masters last weekend, the season-ending event on the Ladies European Tour, she heightened anticipation for her rookie year. She did so overpowering the competition at Emirates Golf Club, launching big drives that gave her a big advantage over older and more experienced foes. Thompson hit a remarkable 67 of 72 greens in regulation. When she won at Navistar, she averaged 277 yards per drive, longer than Yani Tseng that week. And Tseng led the LPGA in driving distance.

Through two turns on the PGA Tour Webb Simpson had put together a respectable, if undistinguished, resume – 68 starts, six top 10s, back-to-back seasons inside the top 125 in earnings.

He was the kind of guy you may take for your fantasy team with a knowing wink, but anyone outside of Simpson’s immediate family who tabbed the third-year Tour player for stardom in 2011 was either clairvoyant or completely delusional.

No? Consider that late into the fall of 2010 Simpson was 229th in the World Golf Ranking, he was 45th on the U.S. Presidents Cup points list and he wasn’t even qualified to play in any of the four major championships when the year began.

From those humble beginnings Simpson came within $336,000 of the Tour money title – to put that number in context it was the difference between a tie for sixth at Disney, where he finished, and a runner-up showing, or two strokes – and within 15 points of Bill Haas following the FedEx Cup champion’s Houdini-like heroics at East Lake.

Simpson closed the season with a 3-2-0 outing in his rookie Presidents Cup and was likely second in Player of the Year voting to Luke Donald, although the Tour doesn’t release vote totals.

It was a breakout performance by any measure.