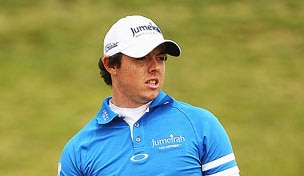 SANDWICH, England – Rory McIlroy entered the Open Championship as the betting favorite. He left it without ever really being in contention.

The U.S. Open champion arrived at Royal St. George’s having not played a competitive round of golf since that historic Sunday last month at Congressional. Many believed rust would be his demise.

But that never seemed to be the case – after all, at least McIlroy made the cut. World Nos. 1 and 2 Luke Donald and Lee Westwood didn’t even play the weekend.

The bigger issue for McIlroy, 22, seemed to be the weather. He never came to peace with the fact that the weather was awful all week.

“I’m not a fan of golf tournaments that the outcomes (are) predicted so much by the weather,” McIlroy said. “It’s not my sort of golf.”

“It definitely wasn’t the week that I wanted,” McIlroy said. “I’ll have plenty more opportunities to win the Open.”