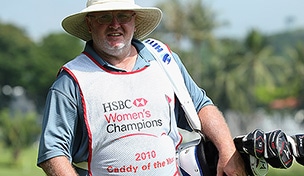 Getty Images
After a few minutes on the water, Gone With the Win's Win McMurry is successfully standing up on her paddleboard.  -

They are professional caddies looking to develop their industry as a true profession.

That’s the stated goal of the new Tour Caddies Association, an organization that announced its launch last week.

Dean Herden, Gary Matthews and Basil Van Rooyen are caddies and co-founders of the TCA, a fledgling association whose membership is now open to all professional tour caddies, including PGA Tour, European Tour and LPGA caddies. The association’s mission and services are spelled out at www.tourcads.com.

“It’s always bothered me seeing caddies waiting in a parking lot the week of a tournament, hoping to land a job,” Herden said. “I’ve seen a caddie who won two U.S. Opens looking for a job in a parking lot. That’s not right. We would like to see the industry professionalized. That’s the idea behind this.”

So Herden teamed with Matthews and Van Rooyen to start an association intended to serve the needs of caddies while also acting as an advocate for them. Herden caddies for the LPGA’s Hee Kyung Seo and previously for world No. 1 Jiyai Shin. Matthews caddies for the PGA Tour's Trevor Immelman but also has toted the bags of Sergio Garcia, Michelle Wie and Jason Dufner. Van Rooyen caddies for David Frost on the Champions Tour and also has looped for John Daly, Yani Tseng and Mark McNulty.

“Everybody in golf is organized now except the caddies,” said Michael Marini, the TCA’s director of business operations. “They’re the last element of the game not organized or standardized.”

If you think that sounds like a union movement, Marini insists it isn’t.

“We are not a union,” Marini said. “It’s the furthest thing from our minds. We are not here to organize a labor industry.”

Instead, Marini says, the TCA will be a service organization. There will be job postings, with the association seeking to connect its members with Tour pros looking for caddies. There also will be travel, financial planning, retirement and insurance services. There’s even a profit-sharing plan in the works.

Marini was enlisted by the three co-founder caddies for his expertise with Marini Player Management, a financial management company for professional athletes.

Tour caddies can join the TCA for an annual membership fee of $199. The TCA is a limited liability company (LLC).