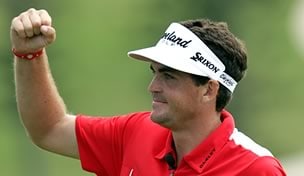 Getty Images
WENTWORTH, ENGLAND - MAY 22: Paul Casey of England acknowledges the crowd on the 18th green during the Second Round of the BMW PGA Championship at Wentworth on May 22, 2009 in Virginia Water, England. (Photo by Richard Heathcote/Getty Images)  -

The PGA Tour season begins next week with 28 winners from 2011 teeing it up at Kapalua in the Hyundai Tournament of Champions. The Tour announced the final field after the Friday deadline to commit.

FedExCup champion Bill Haas will be part of the field in the no-cut event, which starts on a Friday and finishes on a Monday.

Including Bradley, a handful of the half-dozen rookie winners will also play at the Plantation Course, including Jhonattan Vegas, Chris Kirk, Brendan Steele and Scott Stallings.

Several big names did not commit to play, however.

Martin Kaymer also declined an invitation to play based on winning the WGC-HSBC Champions. World No. 1 Luke Donald, whose wife gave birth to their second child in November, will not play in the season-opener.  And Houston winner Phil Mickelson continues to skip an event he hasn’t played in since 2001.

All four rounds will be broadcast on Golf Channel.