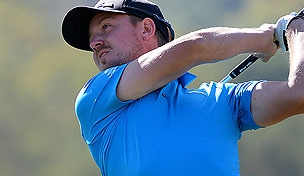 Getty Images
KIAWAH ISLAND, SC - AUGUST 06: Gary Woodland of the United States hits a shot during a practice round of the 2012 PGA Championship at the Ocean Course on August 6, 2012 in Kiawah Island, South Carolina. (Photo by Andrew Redington/Getty Images)  -

SAN MARTIN, Calif. – Jonas Blixt isn’t prepared to make the same mistakes he did the last two seasons. Blixt, keeping with an older model of his Cobra clubs, shot 2-under 69 in the first round of the Frys.com Open.

The defending champion said he used newer model clubs to start the last two seasons, and by admission played like … a bad word.

“(When) I switched back to my old irons, it turned my whole season around,” Blixt, who was five shots off the early lead Thursday, said. “They work. I can hit the kind of cuts that I want.

“There was nothing wrong with the swing.”

In 2012, Blixt missed five of his first nine cuts and then reeled off five top 10s the rest of the way, including a victory at the Frys.com. After a lackluster beginning to the 2013 season, Blixt changed back to his trusted Cobra S3 clubs at The Players Championship and went on to win The Greenbrier Classic and finish fourth at the PGA Championship.

Will he ever shelve them again? Yes, for a boat-load of cash.