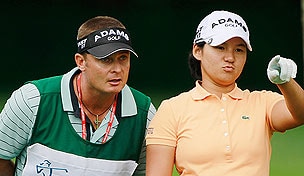 Yani Tseng is narrowing in on her 12th worldwide title this year.

With a 2-under-par 70 on a cold, wet and windy Saturday at Miramar Golf & Country Club in New Taipei City, Tseng moved to 2-under 142, a shot better than South Korea’s Amy Yang. Rolex world No. 1 Tseng is bidding to win her third title this year in her Taiwan homeland.

American Paula Creamer struggled to a 79 in difficult conditions, dropping her into a tie for 14th. Tseng and Yang are the only players under par in the special event.

“It was the worst [weather] I’ve ever played in,” Creamer was quoted saying in the Taipei Times.