Tseng a shot back after first round in Taiwan 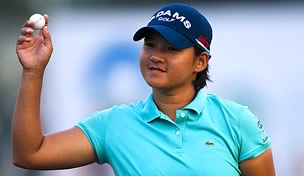 Yani Tseng is in early position to try to make it an even dozen worldwide victories this year.

Tseng opened the Swinging Skirts Invitational in New Taipei City with an even-par 72 on a cold, blustery and rainy Friday, positioning herself in a tie for third place, just a shot behind the leaders, Momoko Ueda of Japan and Yang Soo-jin of South Korea.

Tseng is going for her third victory this year in her Taiwan homeland.

Eighty-four players from 10 countries are playing in the special event with a $166,666 first-place prize.