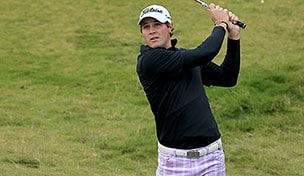 Peter Uihlein had an opportunity to make European Tour history on Friday, but his bid for the first-ever 59 agonizingly missed by inches.

Already with two eagles and seven birdies on the par-72 Kingsbarns course, Uihlein needed a third eagle on his final hole – the course’s ninth – for the magic number. After bombing a drive down the fairway and hitting his second to about 40 feet, his eagle bid got to the hole, but missed on the left side.

Instead, the 24-year-old American settled for a share of history. His score of 60 tied 16 others for the lowest mark ever posted on the European Tour. Brandon Grace and Brandt Snedeker each posted the number last year.

After an opening-round, even-par 71 at Carnoustie, the score moved Uihlein into contention at the Dunhill Links Championship, seeking his second victory of the season. He trails leader Tom Lewis by four strokes at the midway point.