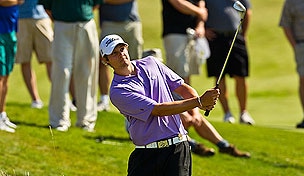 Uihlein, who will officially turn professional Jan. 1, will make his pro debut at the Abu Dhabi HSBC Championship and play on the European Tour next year.

'I had a great 3 1/2 years at Oklahoma State. The school and the program were great for me, and I believe I contributed to the program’s tradition. (But) I wanted to have the full calendar year to start the next chapter in my life and not start midseason. The coaches at Oklahoma State understood my decision,” Uihlein said in a statement.

The decision to turn pro represents a change of heart for the son of the Acushnet CEO. The Oklahoma State standout tried unsuccessfully to get through both PGA and European Tour Q-School as an amateur. Uihlein had said he would return to school for his senior year, regardless of the outcome in either tournament.

'It is a pioneering move by him – the obvious step would have been to try to establish his career in the United States,' Chandler said in a release.

'But having seen players like Lee Westwood, Charl Schwartzel, Louis Oosthuizen and Darren Clarke build careers by playing all over the world, including America, Peter has been encouraged by that. I'm sure that he will benefit enormously from the experience.'