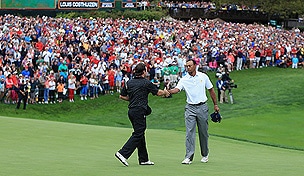 Getty Images
Win McMurry does her best impersonation while touring the NBC Studio Store in New York City while there for Gone With The Win.  -

On a day that was largely devoid of drama, the United States won five singles matches Sunday en route to its fifth consecutive win over the International team at the Presidents Cup. Here’s the skinny from Muirfield Village:

What it means: It was another lopsided result in a series that has seen far too many of them. The final score wasn’t entirely unexpected, however. On paper, the Americans were a significantly stronger and deeper team; they had no player ranked outside the top 30 in the world, while the Internationals had six. As expected, the U.S. continued to build on its lead as the week progressed, and there was little doubt which team would win when the Americans were staked to a six-point lead heading into singles. At the end, the Internationals tacked on golf's equivalent of garbage-time touchdowns.

Match of the day: The point mattered little in the end, but Graham DeLaet continued to impress with his 1-up victory over Jordan Spieth. The Canadian clinched the win by holing out from the bunker on 18, improving his record to 3-1-1 for the week. All square on the par-3 16th, Spieth found the water with his tee shot and then channeled his inner Woody Austin, bashing his club against his head.

Best of the rest: Jason Day landed the earliest punch for the Internationals, crushing Brandt Snedeker, 6 and 4. Unfortunately, that victory counted for only one point. Day finished his week with a 3-1-1 record. Jason Dufner also improved to 3-1 with his 4-and-3 victory over birdie-machine Brendon De Jonge. And Tiger Woods, whose lingering back injury flared up again on the back nine during his singles match against Richard Sterne, delivered the clinching point for the Americans, a fitting coda to his 4-1 week. It was the third time that Woods has played the role of cup clincher.

Biggest disappointment: The Presidents Cup drifted into further irrelevance Sunday as the U.S. won by at least a three-point margin for the fifth consecutive match. The weather did little to help the matches, as there was heavy rain during each of the four days of competition, and neither did the captains. With a six-point lead, U.S. captain Fred Couples opted to send out Woods against Sterne. Add it all up, and there was no buzz as the Americans took a six-point lead in the 12 singles matches, where they needed just four points to win for the eighth time in 10 tries.