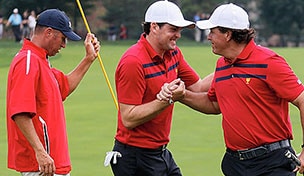 Getty Images
CARMEL, IN - SEPTEMBER 09: Rory McIlroy of Northern Ireland walks off of the green after he finished the final round at -20 to give him the win in the BMW Championship at Crooked Stick Golf Club on September 9, 2012 in Carmel, Indiana. (Photo by Scott Halleran/Getty Images)  -

DUBLIN, Ohio – Another rain delay, another successful American session at the Presidents Cup, as officials and players race to complete Saturday’s weather-plagued frame at Muirfield Village.

A downpour just past noon rendered the course unplayable midway through Saturday’s fourball session and prompted the third suspension of play this week, this time for an hour and 17 minutes, but the Americans moved four points clear at the biennial event winning four of the five fourball matches to take a 10 ½ to 6 ½ lead into the afternoon gloom.

“Today we played so good,” said Bradley, who combined with Mickelson to birdie Nos. 11-15 after falling behind early in the match. “We were two down early, and we pretty much birdied out from there. It was tough to beat us.”

Bill Haas and Webb Simpson also added to the American advantage, steamrolling Angel Cabrera and Branden Grace, 4 and 3; and Brandt Snedeker and Hunter Mahan got on the board for the first time this week, beating Louis Oosthuizen and Charl Schwartzel, 2 up.

“We understand how important every match is right now,” Snedeker said.

Tiger Woods and Matt Kuchar closed out the morning rout with a rally following the rain delay. The two combined to play Nos. 13-15 in 4 under par and closed out Adam Scott and Hideki Matsuyama, 1 up.

Jason Day and Graham DeLaet provided the only International point in the morning, beating Steve Stricker and Jordan Spieth, 2 up.