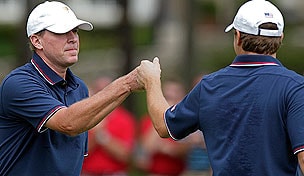 While the Americans appeared in control for much of the day in Ohio, a late afternoon rally from the International Team cut into what could have become a sizeable deficit at the Presidents Cup. Here's how things shape up after the first day of matches at Muirfield Village, where the U.S. Team holds a 3 1/2 to 2 1/2 lead:

What it means: The U.S. squad at one point led in all six fourball matches and seemed very much in control before a weather delay brought their momentum to a halt. The Internationals stormed back once play resumed, trimming what could have been a 6-0 or 5-1 margin to just 3 1/2 to 2 1/2 by day's end.

Match of the day: After winning the opening hole, Day and DeLaet found themselves 3 down after just six holes. The duo battled back, though, winning holes 7-8 and finally re-taking the lead after a birdie from DeLaet on No. 16. Though Snedeker squared the match with a birdie on the 17th hole, Day closed things out with a lengthy birdie at the home hole to give the International Team its first point of the week.

Best of the rest: The pair of Haas and Simpson didn't lose any of the first eight holes in their match, amassing a 2-up advantage in the process. After Scott squared the match with birdies on Nos. 9 and 11, the Americans reinstated their prior advantage with wins on holes 12-13. The International pair would not go quietly, however, winning three of the final four holes, including a kick-in birdie from Matsuyama on No. 18 to ultimately halve the match.

Biggest disappointment: Entering the day's fourth match, many expected the veteran Els to help carry de Jonge, his partner playing in his first Presidents Cup. Instead, it was the Zimbabwean that carried the team with little if any support from the four-time major champion. De Jonge carded seven birdies across a nine-hole stretch in the middle of the match, but clutch putting from Spieth and Stricker kept the Americans ahead for nearly the entire match. An International rally was largely derailed when Els, who recorded just a single birdie Thursday, missed a short putt at No. 16.

Main storyline heading into Friday: Though the Americans hold a one-point advantage, the International Team will likely take some momentum from their late rally into Day 2. Still, the Americans can take solace in knowing that the team that won Day 1 has gone on to win the cup in all but one of these competitions. Six more contests await Friday, this time in the foursomes format in which the U.S. has historically held a significant edge.