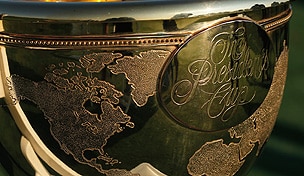 DUBLIN, Ohio – Just before daybreak on Saturday at the weather-delayed Presidents Cup, Brandt Snedeker hit his 9-iron approach shot from 150 yards at the par-4 14th to 2 feet to pull even in his foursome match against Angel Cabrera and Marc Leishman.

Momentum in the session’s ultimate swing match seemed to have swung in the U.S. side’s favor, but the Internationals just as quickly put the point away when Leishman rolled in an 8 footer at the 15th hole for birdie to move 1 up on Snedeker and Webb Simpson, and rifled a 7-iron from 192 yards to inches at the 17th hole to secure a pivotal 2-and-1 victory.

“It was really important for the team and our confidence,” said Leishman, one of International captain Nick Price’s seven rookies. “We didn’t need to lose two in a row and to get that win was huge for us.”

The American tandem of Zach Johnson and Jason Dufner also failed to rally in their match against Adam Scott and Hideki Matsuyama, despite three consecutive birdies starting at the 13th, and lost 2 and 1.

Tiger Woods and Matt Kuchar closed out the South African tandem of Charl Schwartzel and Louis Oosthuizen, 4 and 2, and Steve Stricker and Jordan Spieth topped Brenden Grace and Richard Sterne, 2 and 1.

“We really played well. At one point we were 7 under through 11,” said Woods, who remains undefeated paired with Kuchar.

The teams split the Day 2 foursomes matches, the first time the Internationals haven’t lost an alternate-shot session since Day 1 in 2005, and the U.S. held onto a narrow lead, 6 ½ to 5 ½.

The Day 3 four-ball matches began at 8:30 a.m. (ET) and officials hope to play two full sessions on Saturday although the forecast may not cooperate. Play was delayed nearly an hour and half on Thursday and more than two and half hours on Friday because of inclement weather.