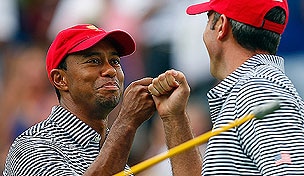 Getty Images
NEWPORT, WALES - OCTOBER 03: Rory McIlroy (L) of Europe celebrates with teammate Graeme McDowell after winning their match on the 17th green during the Fourball & Foursome Matches during the 2010 Ryder Cup at the Celtic Manor Resort on October 3, 2010 in Newport, Wales. (Photo by Jamie Squire/Getty Images)  -

After a rain delay of more than two hours, play was suspended because of darkness Friday night at the Presidents Cup with four matches still on the course. Here's how things stand at Muirfield Village, where the U.S. holds a 4 1/2 to 3 1/2 lead:

What it means: Though only two matches were concluded Friday, it appears both teams will score points quickly Saturday morning, with three of the four remaining contests boasting wide margins. Barring significant comebacks once play resumes, it seems the rout that appeared possible early Thursday afternoon has now turned into a closely contested battle with a marathon day of golf now ahead.

Match of the day: In one of the more star-studded matches of the day, Woods and Kuchar traded birdies with their South African opponents; in total, the quartet played the opening eight holes in 11 under utilizing the alternate-shot format. The Americans, though, were able to regain a 2-up advantage at No. 9 when Oosthuizen missed a putt from short range and widen their lead when the former Open champion found the water at the par-3 12th.

Best of the rest: In the day’s first match, Mickelson and Bradley got off to a hot start and did not look back. The Americans were out in 6-under 30, amassing a 4-up lead in the process. In total, Mickelson and Bradley won seven out of eight holes from Nos. 5-12, burying the International duo of Day and DeLaet beneath an avalanche of red figures before closing out the proceedings on the 15th green.

Biggest disappointment: After they appeared nearly unstoppable during Thursday’s fourball session, Johnson and Dufner struggled mightily in the anchor match Friday afternoon. The Americans mustered only a single birdie against Scott and Matsuyama, quickly falling 2 down and increasing the International lead to 4 up after an uncharacteristic bogey at the par-5 11th.

Main storyline heading into Saturday: The third day of this year's Presidents Cup will be one of endurance. With the remaining foursomes matches set to resume at 7:35 a.m. ET, players will have a one-hour break before beginning five morning fourball contests. Another set of five foursome matches will follow in the afternoon, as tournament organizers look to get back on schedule following a second straight day marred in part by a weather delay.