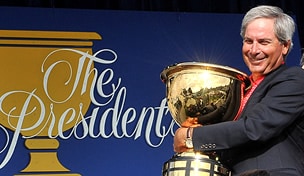 Getty Images
HILVERSUM, NETHERLANDS - SEPTEMBER 10: Paul McGinley of Ireland plays his approach shot on the 18th hole during the second round of The KLM Open Golf at The Hillversumsche Golf Club on September 10, 2010 in Hilversum, Netherlands. (Photo by Stuart Franklin/Getty Images)  -

Here is a breakdown of United States captain Fred Couples’ 12-man roster for the 10th biennial Presidents Cup, which will be played Oct. 3-6 at Muirfield Village Golf Club in Dublin, Ohio. Click here for International team capsules. The U.S. is the defending champion and holds a career 7-1-1 record in the competition. The lowdown: Unlike at the Ryder Cup, the best player on the U.S. team has actually been at his best during some editions of this event. Though he went 2-3-0 as a captain’s pick two years ago, Woods has often turned Muirfield Village into his personal playground, winning the Memorial Tournament on five occasions. The lowdown: The second-leading point-earner based on wins at Pebble Beach and the Canadian Open this year, Snedeker has often gotten it done with ball-striking this year as opposed to his slick putting. But the reigning FedEx Cup champion hasn’t enjoyed such prime late-season timing so far this season. The lowdown: Consider it a testament to his longtime consistency that Mickelson will compete this year for a record 10th time. And yes, that has to be a record because this is the 10th edition of the event. The only man who’s never missed one has had his share of ups and downs here, owning the dubious distinction of a record 10 match ties. The lowdown: Here’s a potential recipe for success: Kuchar’s two wins this season came at the WGC-Accenture Match Play Championship and The Memorial Tournament. Considering this event is contested in the match play format on the same course as the Memorial, common sense should tell us that this should be right up his alley. The lowdown: The term “rookie” may suggest inexperience, but in the case of a 36-year-old major champion who’s previously competed in the Ryder Cup, it becomes a mere formality. Dufner’s calm demeanor and solid ball-striking skills should be an asset, not to mention his recent strong form. The lowdown: Two years ago, Bradley was believed to be Couples’ biggest snub, left off the team a month after his PGA Championship victory in favor of Woods and Haas. This time around he didn’t need a captain’s selection. Expect him to pair with frequent practice round partner Mickelson, as they formed a dynamic duo at Medinah last year. The lowdown: It’s one of the most remarkable stories in golf in years. Prior to this season, Stricker decided to semi-retire, choosing to spend more time at home than on the road. And yet, his game has gotten even better, as evidenced by a solo second at TPC Boston to qualify for the team. Don’t be surprised to see him partner with Woods again.

The lowdown: If top-10 finishes is the stat to best showcase consistency, then Haas may have a claim at the PGA Tour's most consistent player this season, as his nine top-10s tied for the Tour lead. Two years ago, he was underwhelming in his initial team competition, but since then he’s matured into a better and – yes – more consistent player. The lowdown: He’s often been the odd man out after the qualification process, left to sit by the phone and receive a captain’s pick for both this event and the Ryder Cup. This time, though, Mahan made the roster on his own merit. Playing in the final twosome at both the U.S. Open and Open Championship should have him prepared for the spotlight. The lowdown: Call it a walk-off or a buzzer-beater, but Johnson’s 26-foot birdie putt on the final hole of the Deutsche Bank Championship to qualify for the team was about as clutch as it gets. And he’ll come into the event in terrific form, with a win at the BMW Championship. The lowdown: What a meteoric rise for a kid who began the season as a teenager with no status on any tour and will end it with a PGA Tour victory, a top-30 world ranking, and, now, a place on the Presidents Cup roster. This may be a first for Spieth, but it’s a first of many. The lowdown: During a Monday night teleconference, Couples rhetorically asked, “How do you not pick that guy?” It turns out, he didn’t have an answer to his own question, choosing to place last year’s U.S. Open champion on the team. He acquitted himself well in his first Presidents Cup two years ago, winning his first three team matches.