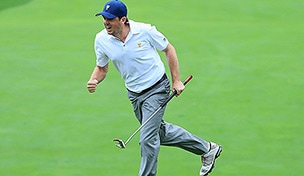 Getty Images
Watching his putt near the hole, Derek Bohlen hopes that he hit it on the right line during Big Break Greenbrier.  -

DUBLIN, Ohio – If anyone knows you can’t win a cup before the final singles session, it’s the members of this United States team.

One year after parlaying a four-point Sunday morning Ryder Cup lead into an agonizing defeat, the U.S. leads 14-8 entering the Presidents Cup singles matches, which were moved up because of impending thunderstorms.

At one point in the fourth session, the International team led all five foursomes matches, potentially turning the competition into a tight contest. Jason Dufner and Zach Johnson sealed a come-from-behind victory with an eagle hole-out by the latter on Saturday afternoon, then their teammates followed suit on Sunday morning, as the U.S. earned 3½ points in the session to grab a commanding lead.

The session wasn’t without some fireworks. In a back-and-forth match, Phil Mickelson and Keegan Bradley came to the 18th hole all square against Jason Day and Graham DeLaet. After Mickelson hit a big, bending approach shot just short of the hole, DeLaet chipped in for birdie only to have Bradley pour in a birdie putt on top of him to halve the match.

“It was the most nervous I’ve ever been, for sure,” Bradley said afterward. “But I want everyone to know that Phil's shot was better than my putt. That was a really hard shot. I'm just proud that I made it. Phil gave me a good read, and, man, it feels really good.”

In other matches, Webb Simpson and Brandt Snedeker mounted a furious comeback against Charl Schwartzel and Louis Oosthuizen, as the South African duo played the final six holes in 5 over.

Bill Haas and Steve Stricker cruised to a 4 and 3 win over Adam Scott and Hideki Matsuyama, posting seven birdies in 15 holes.

The lone International victory in the session came from Ernie Els and Brendon De Jonge, as they held off Tiger Woods and Matt Kuchar for a 1-up differential.