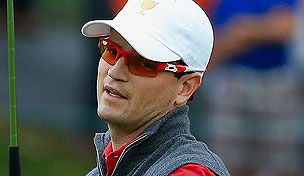 Get ready for a marathon Sunday at the Presidents Cup, where the weather continues to be as much of a factor as the 24 players. Here’s the skinny from Muirfield Village:

What it means: Another lengthy delay will force a disjointed Sunday conclusion at Muirfield Village. The four foursomes matches yet to be completed will resume at 7:35 a.m. ET Sunday, with singles scheduled to begin at 9 a.m., barring any further delays. Three of the four matches still on the course are at least a 2-up lead. The U.S. needs six points to win the Presidents Cup for the eighth time in 10 tries.

Match of the day: Jason Day and Graham DeLaet appeared to set the tone early for the Internationals’ comeback, jumping out to a 3-up lead through five holes over Phil Mickelson and Keegan Bradley, one of the Americans’ most formidable teams. But by the time play was suspended for the day, the U.S. duo had clawed all the way back to all square with five holes to play. This point is crucial for both teams.

Best of the rest: Jason Dufner and Zach Johnson earned their second point of the week with a 4-and-3 victory over Marc Leishman and Richard Sterne. Two down early, Dufner-Johnson reeled off wins at Nos. 8, 9, 11, 13 and 14, and then holed out for eagle from the 15th fairway, to give the Americans their first point of the afternoon session. That duo sat out Saturday fourballs.

Biggest disappointment: Mother Nature has again wreaked havoc on a tournament, and fatigue seemed to play a factor in the Saturday foursomes. The long day affected the caliber of play in the fourth session, with few fist pumps and even fewer birdies. Sunday doesn’t figure to be any easier, not with a 5 a.m. bus ride back to Muirfield Village to resume the foursomes session, 12 singles matches, and the prospect of even more rain in the forecast. Individually, Brandt Snedeker seems poised to drop to 1-3 for the week.

Storyline heading into Sunday: The United States has won seven of the nine Presidents Cups, and it had a four-point lead heading into the fourth session. Will the Americans continue to pad their lead Sunday morning and take a comfortable cushion into the 12 singles matches, or will the Internationals complete a miraculous foursomes comeback and head into the final session with a great chance to win for the first time on foreign soil?