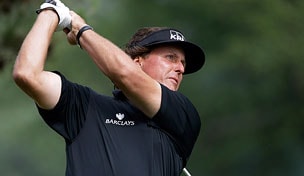 ARDMORE, Pa. – Phil Mickelson was complimentary of the U.S. Open setup all week, and had nothing but great things to say about the championship’s return to Merion for the first time in 32 years.

But he wasn’t too pleased with the difficulty of the par-3 third hole, where many players were hitting 3-wood into the green.

Mickelson was caught by an NBC camera saying, “That’s terrible, 274 (yards), we can’t even reach it” to a USGA official (go to 30-second mark in the video below). Not surprisingly, Mickelson had just made double bogey there.

“Well, let me start out by (saying) Phil is a class act,” Davis said. “He was nothing but complimentary this week from the standpoint of he embraced this golf course, which is great. He saw all the architecture when he played the third hole today.

“We set the golf course up today for a south wind. So you saw us move tee markers up. For instance, if you're playing the 18th hole, you're dead into what would be a south wind. So that's how we set it up. That's why we didn't go to the back tees.

“When we got to the third hole, we were really getting a westerly even a northwesterly wind. So it played long. It played longer than we would have – but having said that, it was a back-hole location that was the most receptive on the green, we felt that it could handle 3-wood shots, if need be.

“We wouldn't have put the tee markers back where we did had we known we were going to get that wind.”