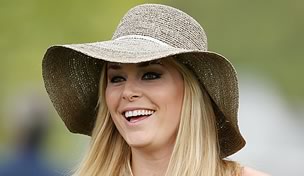 With the Sochi Olympics fast approaching, skiier Lindsey Vonn appeared on the talk show 'Katie' Tuesday to discuss her recovery from a recent knee injury. Not surprisingly, the discussion also drifted to her relationship with world No. 1 Tiger Woods.

When asked to describe Woods, the 29-year-old described the 14-time major champion as 'laid back.'

'He's a great guy,' said Vonn, who made her relationship with Woods known to the public this spring. 'He's always making jokes, very competitive just like me. We have very similar personalities.'

Vonn went on to term her 37-year-old boyfriend as 'dorky,' a label that she wryly admitted Woods might not be pleased to hear.

'If there's one thing I can say, he's funny. He's goofy ... like dorky, goofy,' she added. 'He's probably not going to be that excited that I just said that.'

Watch full video of the clip below: