Villegas again starts strong, but can he finish? 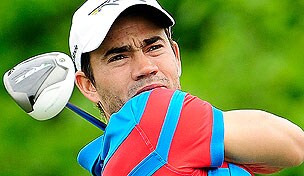 SAN MARTIN, Calif. – Camilo Villegas is accustomed to early-round success this year. Carrying over his good play to the weekend has been the problem.

Villegas shot 5-under 66 Friday at the Frys.com Open. Following his opening 68, he’s 8 under for the event.

Easier said than done. Lack of consistency has hampered him in 2013. For example:

Despite the swoons, Villegas, who is fresh off a four-and-a-half-week stay with family in his native Colombia, has full-exempt Tour status thanks to an 82nd-place showing in the FedEx Cup standings. After losing his card following the 2012 season, he relied on his status as a past champion and sponsor invites to get into events this year.

“You got to have those years,” he said. “You learn a lot. This year I was treated very, very nicely from all the sponsors and tournament directors. I got plenty of starts. I knew the ball was in my court. I had to perform and get it done.”

Which is exactly what he’ll need to do over the final two rounds at CordeValle Golf Club.