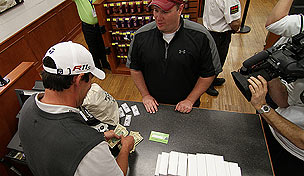 Buying golf clubs is usually an expensive affair, but on Friday in one Scottsdale golf shop, it paid.

After their second round at the Waste Management Phoenix Open, TaylorMade staffers Johnson Wagner and Pat Perez handed out $10,000 in cash at the PGA Tour Superstore. Consumers were asked to try the company’s new RocketBallz 3-wood and were paid $10 a yard, up to $100, for every yard gained from RocketBallz as compared to their current fairway wood.

Over the three hours Wagner and Perez were at the store, they also had a long drive contest with the recently released R11S driver.

After two rounds of the tournament, Wagner is T-12 and Perez is T-65.