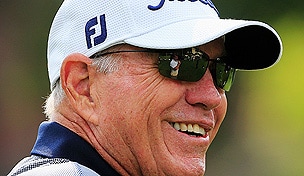 Getty Images
UNIVERSITY PLACE, WA - JUNE 18: Jason Dufner of the United States watches his tee shot on the sixth hole during the first round of the 115th U.S. Open Championship at Chambers Bay on June 18, 2015 in University Place, Washington. (Photo by Harry How/Getty Images)  -

LOS ANGELES – Jimmy Walker enjoyed his best season ever after seeking out Butch Harmon as his new coach two years ago, but Walker said it wasn’t enough for Harmon.

“We didn’t win last season,” Walker said. “We had a good year, though, my best ever, most money I had made, but to him it was, `We didn’t win, and that’s what we want.’ He said you want to win, that’s why we play golf. So, now, we’ve got three of them, so it’s pretty cool.”

Walker, coming off Sunday’s victory at the AT&T Pebble Beach National Pro-Am, will be looking for his fourth victory of the 2013-14 wraparound season when he tees it up Thursday at the Northern Trust Open. It shouldn’t surprise anyone if he pulls it off. Walker loves Riviera Country Club. Walker tied for fourth at Riviera in 2011 and ’12 and tied for 16th here last year.

“Just something about the golf course,” Walker said. “I really enjoy playing it. Every tee shot is just really great.”