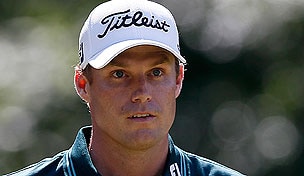 With its $10 million bonus and major exemptions, the FedEx Cup playoffs offer struggling players a chance to salvage disappointing seasons.

Nick Watney was more than happy to take a postseason mulligan at The Barclays.

On a day when Bethpage Black didn’t play nearly as fast and fiery, Watney made three birdies in a four-hole stretch around the turn Sunday to pull ahead, thwart Sergio Garcia’s bid to win back-to-back events and capture his first title of the season.

With a birdie on the last, Watney finished at 10-under 274, three shots clear of Brandt Snedeker. Garcia and Ryder Cup hopeful Dustin Johnson were another stroke behind.

“I’m just very, very happy right now,” Watney said. “It’s been not quite the year I would have wanted, but this really makes it all forgotten.”

Though Watney likely wasn’t on U.S. Ryder Cup captain Davis Love III’s radar prior to The Barclays, his convincing, playoff-opening triumph at Bethpage Black – the fifth Tour title of his career – will be impossible to ignore. So will Snedeker’s runner-up finish. Love will announce his four captain’s picks on Sept. 4.

Watney, 31, seemed assured of making that squad at the beginning of the season. After all, last year, he won twice, led the regular-season FedEx Cup race, earned $5.29 million and finished the year ranked 12th in the world ranking. Through 21 events in 2012, however, Watney hadn’t cracked the top 5 in an event while slipping all the way to 35th in the world.

The trajectory of his season changed dramatically at The Barclays, and the victory rocketed him to No. 1 in the FedEx Cup points race, putting him in line for the $10 million bonus.

Garcia, meanwhile, ended more than a four-year winless drought on Tour with a victory last Monday at the Wyndham Championship, and nearly picked off his second title in six days at The Barclays. But on Sunday, he got off to a bogey start, and his two-stroke lead evaporated by the time he stepped to the third tee.

The turning point came on the 10th hole, where Watney holed a 4-foot birdie putt – his third birdie in four holes – and Garcia three-putted from 20 feet, turning a one-shot lead into a three-shot cushion.

Though Watney made two consecutive bogeys, on Nos. 11 and 12, he returned his lead to three shots with a birdie on 14.

Garcia moved to No. 10 in the FedEx Cup standings, but will not play next week’s Deutsche Bank Championship in order to rest for the season’s closing stretch.

Tiger Woods ended an uneven week with his worst round of the tournament, a final-round 76 that included three birdies, six bogeys and a double. Afterward, he did not talk with the media. The T-38 finish at Bethpage Black dropped Woods from first to third in the FedEx Cup standings, behind Watney and Snedeker, respectively.