Are you afraid of the dark? ... Bubba is 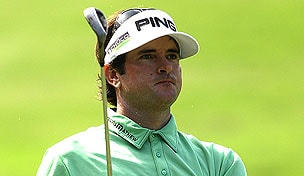 Everyone has something that frightens them, including long-hitting Bubba Watson. What spooks him?

“I’m afraid of the dark, I am terrified of heights, and I am afraid of crowds,” Watson said Saturday at the Hyundai Tournament of Champions in an interview with Kelly Tilghman.

Your friendly correspondent is empathetic, especially as far as heights go. No, thank you.

Watson's fear of crowds should come as no surprise. The three-time PGA Tour winner expressed his displeasure with crowds – and European Tour control of them – last year at the French Open.

“It's different for me, there's cameras, there's phones, there's everything, no security,” he said last July. “I don't know which holes to walk through, there's no ropes. I’m not saying it’s bad, it’s just something I’m not used to and not comfortable with. It’s very strange to me.”

Kapalua should suit Watson well, then. It's obviously at sea level and the resort crowds are sparse compared to others on the PGA Tour. Until Saturday, however, Watson had not broken 70 in five rounds at the winners-only event. He did so in the second round, shooting 4-under 69.

Watson tweeted he thought that breakthrough was 'awesome.'