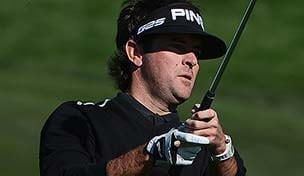 SCOTTSDALE, Ariz. – Bubba Watson was forced to take a stroll down memory lane on Sunday at the Waste Management Phoenix Open.

“You know what? It sucks,” Watson said, “because he beat me at Peek'n Peak (2004) in a playoff as well. He's such a great player, you know, obviously just like his dad because they swing just alike.”

Watson led Stadler by two to start the final round, but missed a 5-footer on the 72nd hole to lose by one. Despite coming up short, Watson says there are no hard feelings.

When asked if he was disappointed by his Sunday performance, an even-par 71 that left him in a tie for second, Watson maintained there were positives to take away from the week.