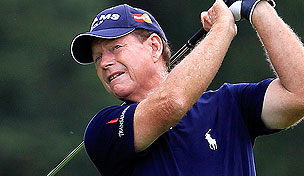 Getty Images
Joe Ogilvie in action during the second round of the FBR Open at the TPC Players Course on Friday, January 3, 2006 in Scottsdale, Arizona.Photo by Marc Feldman/WireImage.com  -

Tom Watson already reduced his number of Ryder Cup captain’s picks from four to three players, and he wondered Tuesday whether that was still three too many.

Speaking at the Year-To-Go event at Gleneagles, Watson told reporters that perhaps the U.S. team should go back to having zero captain’s picks, which would be the “purest form” of the event.

“Maybe that’s the way we should go back to,” Watson said. “I reduced my picks from four to three, and was thinking actually two because I wanted the players who were playing to get on the team to have that as a goal. And if they got there, then they’ve earned something very, very special. Maybe we should go back to that.”

When he tossed the idea to European captain Paul McGinley, the Irishman chuckled and said, “It’s different on the European side, with so many players playing on the PGA Tour. So let’s defer that one, thank you.”

Taking away the wild-card picks would only further reduce the role of the captain, who already largely defers to his assistants and the players themselves. More significantly, however, using only the points system would not necessarily identify the 12 best players at the time and eliminate the Jordan Spieth-type player who couldn’t accumulate enough points to qualify in less than a year’s worth of work.