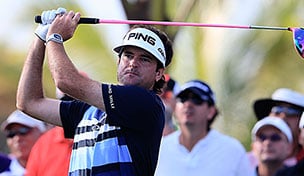 Getty Images
Tiger Woods had his doubters when he first came on Tour in 1996. OK, the kid had won three straight U.S. Amateurs, but let’s see what he can do against some real competition. Woods silenced many of his critics when, in just 11 tournaments in 1996, he won twice. But the 1997 Masters was another test, his first major as a pro. The doubters nodded when Woods went out in 40 for his first nine holes, but that would be their last chance to feel good about their beliefs for a long while. Woods came home in 30 for a 70, then followed with 66, 65 and 69 for a record 18-under 270, becoming, at age 21, the youngest and first non-white Masters champion.  -

DORAL, Fla. – For all the attention being lavished on Patrick Reed, who won his third PGA Tour title in his last 14 starts on Sunday at the WGC-Cadillac Championship, and Jimmy Walker, a three-time winner this season, Bubba Watson may quietly be giving them a run for their money.

Watson has finished outside the top 10 in just two of his seven starts this season and followed his victory at the Northern Trust Open last month with a runner-up showing on Sunday at Doral.

Watson closed with a 68 on Sunday in south Florida and considering his record at Augusta National he will likely rank among the favorites for the season’s first major next month.

“I’m where I want to be. My ballstriking I wish was a little bit better. But certain golf courses just scare me half to death and around here scared me a lot but I played it really well this week,” Watson said.