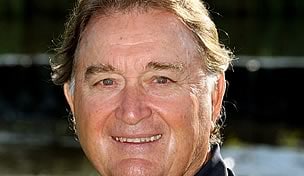 Getty Images
HARRISON, NY - JUNE 14: Brooke Henderson of Canada plays her tee shot at the par 4, 2nd hole during the final round of the 2015 KPMG Women's PGA Championship on the West Course at Westchester Country Club on June 14, 2015 in Harrison, New York. (Photo by David Cannon/Getty Images)  -

Tom Watson added more age and experience to the U.S. Ryder Cup team on Tuesday by naming Hall of Famer Raymond Floyd as one of his assistant captains.

Floyd, 71, most recently served as an assistant in 2008, when the American team routed the Europeans at Valhalla.

“I’m flattered, obviously, and it’s going to be a thrill for me to have his back,” Floyd said. “I think it’ll be a lot of fun.”

This move by Watson has some symmetry: Floyd competed on eight Ryder Cup teams, most recently in 1993, when the Watson-led U.S. squad last won on foreign soil.

During his career Floyd compiled a 12-16-3 record and still holds the distinction as the oldest player to compete in a Ryder Cup (51 years old in 1993). The four-time major winner was the U.S. captain in 1989, when the matches ended in a 14-all tie at The Belfry.

European Ryder Cup captain Paul McGinley said he will not name his vice captains until May or June.

It’s clear that Watson, 64, values the input of older, experienced assistants. In July, he named two-time U.S. Open champion Andy North, 63, as his first assistant captain. North has spent the past two decades as a commentator for ESPN’s golf coverage.

When the Ryder Cup is played in September, Watson and his first two assistants will be a combined 201 years old. Watson said he doesn’t know whether he will name any more assistant captains.

“These players know Raymond, Andy and myself, we’ve been there,” he said. “We know what the Ryder Cup pressure is all about. To have that respect and the trust from the players that we know what’s going on, that can help them.

“The age difference, it’s kind of like a professor. You go to learn from a professor. He has the experience; he has the knowledge. That’s what we bring as captains to the Ryder Cup.”