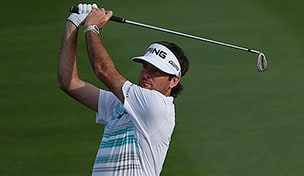 Getty Images
Johnson Wagner reacts to birdie on the eighteenth green during the final round of the Shell Houston Open at the Golf Club of Houston on April 5, 2015 in Humble, Texas. (Photo by Stacy Revere/Getty Images)  -

A record-setting crowd descended upon TPC Scottsdale Thursday as the "Greenest show on grass" got underway. Here's where things stand after one round of the Waste Management Phoenix Open, where Bubba Watson and Y.E. Yang share the overnight lead:

What it means: As is often the case at TPC Scottsdale, low scoring was the name of the game Thursday as players got back to making birdies after a week at penal Torrey Pines. Setting the early pace are a pair of major winners in Watson and Yang, both of whom have yet to win since their respective major triumph, though a total of seven players sit just one shot back.

Round of the day: Watson played well Sunday in San Diego and carried that momentum into Thursday's round in Arizona, where he birdied the first two holes and never looked back. The southpaw recorded eight birdies in total, dropping his lone shot of the day at No. 11, and seems eager to put a disappointing 2013 season behind him.

Best of the rest: Yang's 7-under 64 was his lowest score on the PGA Tour since the final round of the 2013 Sony Open, and the second year in a row that the former PGA champion has started well in Phoenix. With eight birdies on his card against just a single bogey, Yang has put himself in position to win on Tour for the first time since leaving Hazeltine with the Wanamaker Trophy in 2009.

Biggest disappointment: Defending champ Phil Mickelson was nearly a last-minute scratch after a bad back forced him to make an early exit last week at Torrey Pines, but while the five-time major winner opted to tee it up Thursday, the end product left something to be desired. Mickelson notched five birdies but also suffered three bogeys in addition to a double bogey when his tee shot found the hazard at No. 12. As a result, Lefty shot an even-par 71 that left him in danger of missing the 36-hole cut heading into Friday's second round.

Main storyline heading into Friday: While Watson and Yang both hope to end their winless droughts this week, there are no shortage of big names chasing the co-leaders after one day. That list includes English, already a winner earlier this season in Mexico, and Hunter Mahan and Keegan Bradley, who both sit just two shots off the pace after rounds of 5-under 66.