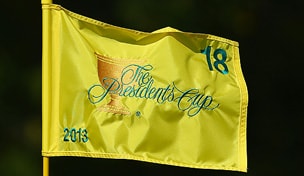 DUBLIN, Ohio – An approaching storm halted play at the Presidents Cup at 2:38 p.m. (ET) with only one of the six four-ball matches past the turn.

Light showers had softened Muirfield Village throughout the day, but a weather system from the north sent players, officials and fans scrambling for shelter.

The practice tee reopened after about an hour delay, and officials plan to have players back in position on the golf course at 4 p.m.

The U.S. leads in five of the six matches.