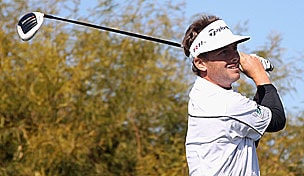 Getty Images
CHASKA, MN - AUGUST 14: Graeme McDowell of Northern Ireland watches his tee shot on the tenth hole during the second round of the 91st PGA Championship at Hazeltine National Golf Club on August 14, 2009 in Chaska, Minnesota. (Photo by David Cannon/Getty Images)  -

PONTE VEDRA BEACH, Fla. – A player couldn’t win a PGA Tour card Friday at the Web.com Tour Championship, but he could lose one.

A half-dozen players who missed the cut will be holding their breath this weekend to see if they lost their chances at playing on the big tour next year.

The battle for the last remaining PGA Tour cards in the Web.com Tour Finals is wide open with so many players who were on the bubble failing to make the weekend.

The players who came here holding the final six spots for available cards are all vulnerable with no chance to improve their money winnings.

Here is how the bubble boys stand on the Web.com Tour Championship scoreboard in the battle for the 25 available cards:

PGA Tour winners Joe Durant and Jhonattan Vegas have made big moves to position themselves to claim cards. Durant shot 3-under-par 67 on the TPC Sawgrass Dye’s Valley Course Friday to move into second place in the tournament, two shots behind Chesson Hadley, who has already locked up his PGA Tour card. Durant is 70th on the Finals’ money list. A top-12 or so finish Sunday should secure his card. Vegas shot 69 Friday and is now tied for fifth. He’s 93rd on the Finals’ money list and could secure his card with a top-10 finish.

All 67 players who made the cut have a chance to win PGA Tour cards this weekend.

Come Sunday, the PGA Tour will award 50 cards at the conclusion of the Web.com Tour Championship. Twenty five of those cards were secured in the regular season, the remaining 25 are awarded off the Finals’ money list.