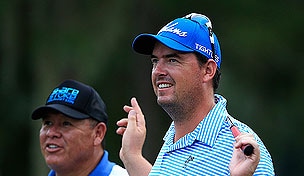 The FedEx Cup has nothing on the Web.com Tour Finals.

With a 7-under-par 63 in Thursday’s start of the Web.com Tour Championship, Ashley Hall is projected to go from the proverbial outhouse to the penthouse in the Web.com Tour Finals. He’s the first-round leader.

Here’s where things can get confusing.

If the Web.com Tour finals concluded Thursday, Henrik Norlander would claim the 25th and final PGA Tour card not secured in the regular season. He’s 34th on the projected Finals money list, but there are nine players ahead of him on the projected money list who have already secured cards in the regular season. This is confusing because that 25th and final card is based on a money-list number that floats. By week’s end, the guy who claims the last card available might be 38th on the Finals money list.