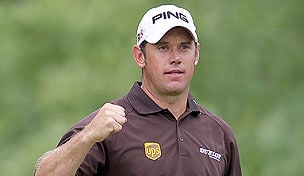 BETHESDA, Md. – Lee Westwood had hovered around mediocrity for 48 holes here at the U.S. Open. Then, when the floodgates finally opened, Westwood played a four-hole stretch in 5 under par vaulting him into contention for the first time all week.

The Englishman was well outside the top 10 but jumped up and made his presence known. He made birdie on 13, 14 and 15, then made eagle from 20 feet on the 16th hole to get to 5 under. He parred the final two holes to shoot 6-under 65.

“I drove the ball great,” said Westwood, who was eight shots behind Rory McIlroy when he finished. “I put myself in position to be able to attach the flags. If you drive the ball well around this golf course, it’s scorable.”

Westwood has had his share of disappointment in major championships, hence his Best Player Never to Have Won a Major moniker. He’s certainly had more near misses than most. Still, he didn’t hesitate mentioning McIlroy’s Masters meltdown two months ago.

“I don’t know where I’m going to be at the end of the day but my mission was to get myself somewhere into the tournament,” Westwood said. “But you don’t know how Rory is going to do. You don’t know how he’s going to deal with the big lead. He had a big lead in a major and didn’t deal with it well before. There’s pressure on him with regards to that.”