Westwood on Ishikawa: 'A bit too intense' 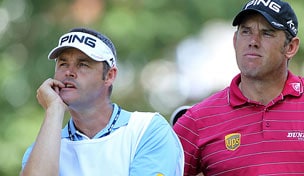 Getty Images
MARANA, AZ - FEBRUARY 16: Kenny Perry plays a shot during the second practice round prior to the start of the Accenture Match Play Championship at the Ritz-Carlton Golf Club on February 16, 2010 in Marana, Arizona. (Photo by Hunter Martin/Getty Images)  -

After two days of playing together, World No. 3 Lee Westwood believes Japanese superstar Ryo Ishikawa needs more time away from the game.

“I don’t think Ryo really doesn’t have any problems because technically he is pretty sound and everybody has off weeks as we saw this week,” Westwood said Friday at the Thailand Golf Championship.

“But if he did have a weak point I feel he’s maybe a bit too intense. He plays a lot, and he said to me he’s played 33 events this year, and that is a lot.'

The Englishman insisted Ishikawa needs to find a release away from practicing and competing. Westwood has found a release in his passion for fitness and training, believing it affords him both a competitive advantage and an escape.

“So in taking a break you come back with the hunger there and that will keep the enjoyment there,” Westwood said.

After narrowly missing the cut on Friday, Ishikawa can take a break – though with a consequence. In order to end the year in the top 50 of the Official World Golf Ranking and earn a spot in the Masters, he would have had to finish in the top 37 in Thailand.