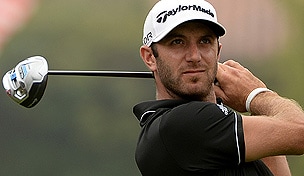 Getty Images
Hideki Matsuyama (2R) of Japan loads his van after he withdrew before the first round of the Shriners Hospitals for Children Open at TPC Summerlin on October 17, 2013 in Las Vegas, Nevada. (Photo by Scott Halleran/Getty Images)  -

Anytime your on-course achievements can be compared to Tiger Woods and Phil Mickelson, it's safe to say you're doing something right.

With his eighth career win at the WGC-HSBC on Sunday in Shanghai, Dustin Johnson became the first player since Woods (1996–2002) to win in seven consecutive seasons straight out of college (2008–present).

Only Mickelson (10 consecutive years) has a longer active winning streak.

And at 29 years, four months and 12 days old, DJ is one of only three players under 30 with four or more victories – DJ (eight), Rory McIlroy (six) and Webb Simpson (four).

This is only the second time Johnson has converted a 54-hole lead to victory – his other coming at the 2010 AT&T Pebble Beach Pro-Am.